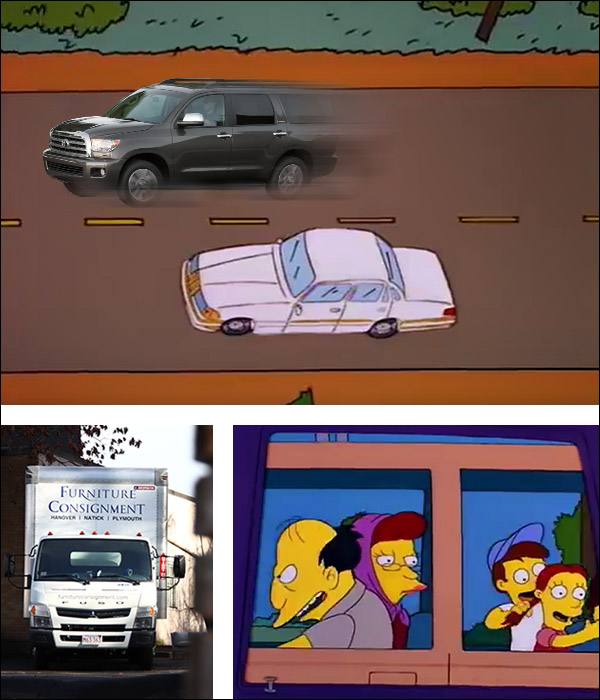 Driving 22 hours straight from Massachusetts to Florida seemed like a good idea in theory – that is, before I pulled out of the driveway in a car loaded with kids, suitcases, snacks, toys and games. Months ago, when I checked, the airlines were charging a king’s ransom for spring-break flights to Florida. And the rental car was no bargain, either.

So my wallet made the decision without any apparent concern for my sanity. We would drive 22 hours from Boston to Cape Canaveral. It seemed … heroic.

We left early in the evening. The first few hours were fun. We were excited about the adventure and buoyed by anticipation. But it didn’t take long for joy to evaporate in the cramped quarters of our SUV.

By the time we hit New Jersey, I realized I wasn’t the only budget-conscious dad in New England. There were thousands of us, grimly gripping the wheel with glazed eyes as we darted through heavy traffic in the southbound lanes of I-95. Only four hours into our odyssey, small squabbles were breaking out in the back seat.

My job was to follow the strict driving schedule that would get us to the parking lot of the Kennedy Space Center the following morning by 8 AM. The forced bathroom breaks were the worst. I felt like a prison guard, barking orders at a group of sulky inmates. “Robbie, put your shoes on! Bathroom. Let’s go,” I snarled at our ten-year-old after screeching into the only parking spot in a busy rest stop in Maryland.

“Daaaaad,” he whined. “I don’t have to go!” But my strict driving schedule didn’t allow for a potty break in Virginia. So off he hobbled, unhappily, joining the long line of other south-bound parents and kids trudging into the rest stop.

After thirteen hours, we were as jittery as rapid bats. Every comment and query coming from the back seat annoyed me. The bananas had gotten crushed. Too bad! You want water? Forget it! Turn the music up? No way! By 2 AM, I was gripping the steering wheel with steely determination, but my eyelids were drooping. I felt a bit shaky, but I don’t know whether that was exhaustion or the effect of three large cups of truck-stop coffee.

Close to a state of hallucination, I pulled into the parking lot at the Kennedy Space Center, right on time. I hopped out of the car, shouting, “The Eagle has landed!” I wanted a marching-band welcome. I wanted the legendary CBS newscaster, Walter Cronkite, to take off his glasses and wipe his brow, marveling at my accomplishment by telling the world, “That was something.” Just like he did for the astronauts.

Even now, a week after my re-entry into life back home, I am still having flashbacks.

Yesterday, a scrawny couple pulled up in front of our store in a truck they’d borrowed to pick up a large dresser they’d bought. They refused to pay for delivery in order to save money. They had no moving skills, no packing materials, and no clue.

I wanted to warn them. Don’t be crazy! It’s not worth it! Pay the money! Get it delivered!

Moral of the story: Don’t let your wallet overrule your sanity.

*Images copyright of their respected owners.