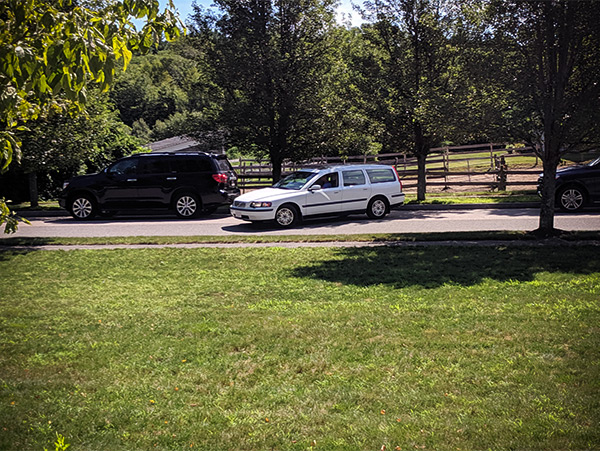 On the street in front of our house, Collin, my 16-year-old son, had staged a mock-up for his upcoming driver’s test. One of our cars was parked in front, another behind it with a large gap in between the two. He was driving an old lumbering tank of a Volvo, trying to maneuver it into the space without bumping into the parked cars or the curb.

Watching from inside the house, I’d lost count of all his attempts to master the most dreaded challenge on the test: parallel parking. In truth, there was probably enough room between the cars to nest a Winnebago, so there isn’t a big risk of denting the bumpers on the parked cars. I applaud his diligence.

Next to me at the window was Roxie, our boxer. She’d apparently picked up on my anxiety. Her head was twitching every time he hit the brakes and the car shuddered, mid-turn. Roxie is generally the most relaxed member of the family, so her red-alert level of tension pretty much captured the level of stress in the household over this upcoming test.

Truth be told, Collin’s success at the driver’s test will be a big win for the rest of the family. When our oldest son sped off to college last September, we lost our resident chauffeur.

So Diana and I were back at the wheel, once again wearily making the evening treks to pick up Collin and his younger brother, Robbie, at friends’ houses on the weekends. (Confession: One night, I fell asleep while awaiting the curfew. Collin had to ask a neighbor to come over and rouse me.) Diana and I also had to resume the morning drops-offs and afternoon pick-ups at the high school, a commute made longer by impenetrable teenage silence.

Robbie, our 11-year-old, is eager for a new chauffeur and comrade-in-adventures. Even Roxie, the dog, seems to anticipate the pleasant duty of sitting shotgun on trips to the odoriferous dump. And FCG’s furniture moving and delivery team will be pleased to have an extra set of hands.

Our insurance premium will go up with another teenage driver in the household. The gas card will get some more exercise, and there will probably be a few more dents on the hand-me-down pick-up truck that he’ll be driving around town. But it will all be worth it. Keep your fingers crossed. It’s a big day for Collin.