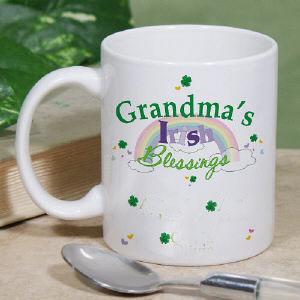 "Hiya, honey," my grandmother said in her accented English over the phone. "Your Uncle Paul was supposed to come f' dinna', but he just cancel. I got a big pot of sauce on the stove, with brigoles, meat-a-balls and macaroni. You hungry, honey?"

"Sure!" I beamed. Wow! Was I lucky or what! She was making all my favorite food - and plenty of it. Little did I know that I was the weak link in our family. Whenever I answered the phone on Sundays, she knew she had all five of us hooked for dinner. "You be here at five - the whole family," she said, and then hastily hung up before my mother could intervene.

I was ecstatic, but my announcement didn't go over well with my parents. They understood immediately that their Sunday had been Shanghaied. My Irish mother had just finished peeling a bucket of potatoes, and her pot roast was just about to go into the oven. "Richard!" she yelled to my father, who was trying to sneak out to wash his car. "Call your mother back and tell her we can't come."

My father would make a couple of attempts to call, but by then her phone was off the hook - another one of my grandmother's clever tactics.

Promptly at five o'clock, we would round the corner of Norwood's Elm Street. I was starving, of course. I'd spent the last thirty minutes vigorously pummeling my two younger brothers in the back seat while my parents periodically yelled at us to quiet down. It was an exhausting but essential duty. I had to work up an appetite for dinner.

As soon as we pulled up in front of the modest blue-grey ranch house, I perked up, thinking of my grandmother's mouth-watering tomato sauce. "Hey," I said brightly to my parents. "Uncle Paul is here after all! His car is in the driveway." 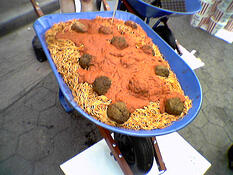 "That kid isn't exactly a genius," my father observed dryly, glancing at my mother. Grandma had snookered the whole damned family - again. When we poured through the front door and headed for the dining room, my Dad and his brother just looked at each other and shook their heads guiltily. There would be hell to pay later with the wives - but, heck, the food was on the table! Dig in!

And what a feast it was. Her meatballs were amazing: moist and big as tennis balls. She'd start with stuffed mushrooms or stuffed clams, follow that with homemade macaroni and brigoles, and top it all off with a golden roasted chicken, a salad, and then a big platter of fruit and nuts. Dessert might be pizzelles, the delicate waffle cookies dusted with sugar. Or a strawberry shortcake. Or a chocolate cake. Or maybe all three.

Some Sundays she hit the jackpot. She'd have twelve to fourteen people to feed. My grandmother never sat down once during the meal, of course. She just circled the table, platter in hand, heaping food onto your plate and reprimanding you for not eating enough. "Whatsa matter?" she'd say after your third helping. "You don't like-a? I cook it just for you!"

We lost my grandmother in the summer of 2006. I inherited the battered old table that we gathered around for so many of those family dinners. The legs were scratched and nicked from a generation of grandchildren swinging their legs - and from a couple of misplaced kicks by my aunt to signal my uncle - enough already! Time to go!

My grandmother's table was a dull mahogany round table made in the 1950s - not exactly my wife's style - so I sold it a couple of years later. I stood in the middle of the FCG parking lot and watched it go down the road strapped to the top of a family van. I was sadder than I ever thought I would be to see it go. What I would give to have one more meal at that table on Elm Street!

You'll find a lot of tables perfect for Sunday dinner at Furniture Consignment Gallery. They might not have as much history as my grandmother's, but I know you'll make your own memories around them. And, if you ask really nicely, I might just give you the recipe for those meatballs. The recipe may be missing an ingredient or five, courtesy of Grandma who has made sure that nothing would ever be the same in her absence. Especially those meatballs and my Sundays.