Posted by Jay Frucci on Sat, September 05, 2015 @ 12: 00 PM
We sprang out of bed even before the alarm. Diana raced to the kitchen, started the coffee and tossed the cereal bowls onto the table. Upstairs, I slathered my face with shaving cream while singing a tune. I nicked myself a couple of times, but, still, I knew it was going to be a great day.
I was full of adrenaline, as excited as I'd been for my first day of college, my first job interview, the day we acquired Furniture Consignment Gallery. 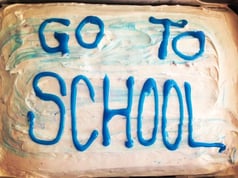 I didn't need any coffee, but what the heck, we were ready to live dangerously. Diana grinned as she slid a hot cup of java across the table to me. Our eyes locked in a conspiratorial gaze.
"We need to focus -" she said.  "We can't screw this up," I blurted out at the same time.
"Those kids are going back to school," we agreed. "Today!" We exchanged a high five for good luck.
Moments later, the boys straggled into the kitchen. Soon, the French toast was flying from griddle to plate. Sure, there was some whining, a few mild curses mumbled under the breath, and the occasional hostile stare from the offspring.  But in record time, the boys were fed and out the door. They looked like a trio of turtles trudging down the driveway with their bulging backpacks strapped to their backs.
Son #1 was on the bus at 6:55 a.m. Son #2 left at 7:05, and #3 at 7:25.
"See you later!" I sang, waving goodbye as the last bus rumbled down the road. Then, I broke into an impromptu and utterly joyful "moon walk" back to the house.
With three boys ages 7 to 15, summer had seemed to last forever. I'd had three long months of repeating myself, louder and louder, to break through the sound barrier of their headphones.  (Favorite phrase of the oldest, repeated endlessly: "Huh?")
Then there were all those last-minute excursions with friends. "Dad, we're going to the golfing range... the ice cream shop ... the pool ... the mall." That was followed by "Can you drive? Can you drive? Can you drive?"
When I wasn't a chauffeur, I felt like the clean-up crew trailing after a three-ring circus. I spent the summer turning off lights in empty rooms, flushing unflushed toilets, emptying full bins of trash and clearing a path through the sports gear into the house. I was ready for this moment.
Diana gave the boys a sneak peek at their afternoon snack as they walked out the door. She'd baked them a cake. On it, in fresh frosting, she'd written the words GO TO SCHOOL.
Freedom! It's wonderful. If the school nurse calls, I'm not answering.
0 Comments Click here to read/write comments