Hope Chests: How To Make Them Child Safe 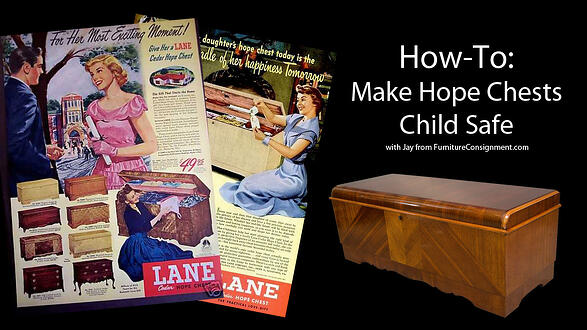 In my home, we have a new puppy! After mourning the loss of our beloved dog a few weeks ago, we just adopted Roxie, a reverse brindle boxer with white socks on her feet. Nine weeks old, she's playful and inquisitive, exactly what we needed.

Having a puppy in the house brings out the mischief in all of us. Roxie is going to be a big dog, so we bought a big crate for her. A couple of times this week, I've come home to find our five-year-old locked in the crate. "Dad," he would plead with a sheepish half-grin, "get me outta here!" When he'd crawled into the crate to cuddle the puppy, his two older brothers pounced on the chance to bolt the door.

Kids love to tease each other and hide in secret places. Like puppies, they have an irresistible urge to play - but they are often unaware of the risks. That's why we want to alert you to a potential danger you may have in your home: the hope chest.

From the 1920s until the late 1960s, hope chests were a treasured gift. In it, young women would store needlework, linens and even baby clothing in anticipation of marriage. Lane's hope chests were among the most popular. They were airtight with robust locks, perfect for preserving heirloom items.

But that meant they also were the most dangerous. Two children recently suffocated to death in a Lane Hope Chest in Franklin, MA. Once the lid closes on these well-made chests, they cannot be opened from the inside. Since 2003, seven children have died in accidents involving hope chests.

Most antique and consignment stores are aware of the dangers and have removed the locks, but there are millions of old hope chests still in use in homes with locks intact. Removing the lock is easy. As a public service, we've created a "how to" video to show you how to do it. Lane also is offering safer replacement locks for free.

So please, watch the video and spread the word. If you have a hope chest or know of someone who does - even if it is tucked away in a corner of the attic - remove the lock. You could save a life.