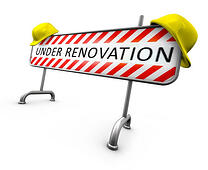 "The contractor is going to be here in an hour," she said casually. "He's ripping out the kitchen island."

I stopped dead in my tracks. "Why?" I blurted, without thinking. "It's beautiful." She had a kitchen that would be the envy of any serious cook. Hers was an island just made for kids' afternoon snacks and homework or wine-and-pizza with friends. Distressed black with red undertones, it had a rich cherry wood top.

"Don't worry," she assured me. "We're going green. We're going to re-purpose the island as a work bench in the barn." She started detailing the master plan for the new kitchen to me, excited about the cabinetry and the new stainless-steel appliances that were on order. All I could think about were the paint brushes, wrenches and nails that would be strewn across that polished island top once it was dispatched to the barn. 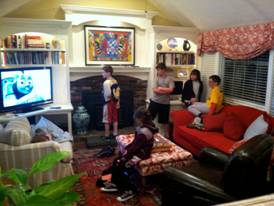 Renovations are good for the economy, and hers was one of many signs that things are picking up after a four-year housing slump. In another home we visited this week, an expanded master suite had hardwood floors so vast and gleaming they would have made a great bowling alley for my three boys. This home owner realized they made the room too big and was ready to begin additional alterations to further complicate or correct the problem.

As a furniture consignment guy, I get to see a lot of homes here in Boston and its suburbs. Rarely do the new - or newly done - mansions command my attention. In a way, some of them seem as cold and lifeless as mausoleums. What gets me is something that no contractor or architect in the world can give a home: warmth.

You can't draw warmth on a blueprint. Warmth comes from a home that tells the story of the lives lived within: the kids' art framed and hung in the family room like an Old Master, the embroidered pillow you made the winter of the big snowstorm, the tiny nicks on the legs of the breakfront, a reminder of the toy trucks that got rammed into them when your son was three. You can't buy warmth, but you can achieve it.

Visit one of our three showrooms this weekend. We have a lot of beautiful furniture, once loved, that came from my kind of homes. Let us help you build some warmth in your home so that you can live a good life in it.

Sometimes, I gotta confess, you see the damndest things when you're picking up furniture in people's homes.

"Oh, that," said the lady of the house, waving airily at a small baggie stuffed with crisp brown leaves sitting on her coffee table. "Just ignore it," she added. "My stepson should know better than to leave his weed out where anyone can find it."

I had no interest in the baggie, but the furniture looked good, so we took it. Carrying a desk down the stairs and out the door, Matt and I almost stepping on a different plastic bag, neatly bundled, that she'd left sitting on the front stoop. "Watch out," she barked. "Dog shit!"
Oh, the perils of furniture pick-up. Don't get me wrong, though. I'm happy to be back in the truck. For the last few months, I've been tied to my desk working out the details of staffing and filling our new store in Plymouth, which, happily, opened to great reviews on March 1.

Finally, now, I can get back to hunting through rough waters and green pastures for great furniture.

What was that quote by Jack Kerouac? "Nothing behind me and everything ahead of me, as is ever so on the road." We former English majors think like this when we get a few miles from home and office.

Our next stop was to see a retired firefighter. Her name was "Murf." If your home was ablaze, you would want her manning the hose. 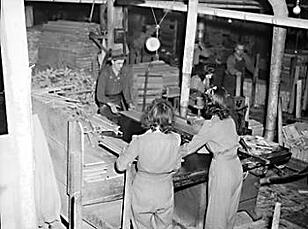 Built like a fireplug, she was competent and compassionate - and she knew more about furniture than me. Her father, it turns out, was a salesman for woodworking equipment. She'd spent part of her childhood visiting the big furniture factories that once dotted the landscape. Murf was witness to a great era of American furnituremaking and she didn't even know it.

After Murf, we visited a couple of storage units, an upscale house in a country-club development, and a couple of homes in the ragged stage of renovation. The result: an action-packed day for me and my trusty travel companion Matt who was subbing in for Nick who was home with his new baby boy. Coming home, the truck was stuffed with furniture and we were stuffed with tales of the riot of humanity out there.

He'd gotten it right, Kerouac. Keep on rolling, he said, and "lean forward to the next crazy venture beneath the skies."

An Old Friend to the Rescue

Our once-a-year sale requires all hands on deck, so we were pretty happy when an old friend stopped by the showroom to help. Jim is a former corporate executive who suffered a brain aneurysm, and a heart attack eight years ago. His health problems cost him some cognitive ability, but he hasn't lost his confidence, his talent for leadership or his sense of humor.

All of those were in evidence when a customer decided to buy a beautiful hand-planed barn board table. She drove to our showroom from her home in Connecticut, prepared to haul home her treasure. She brought a U-haul - and her dad. Both father and daughter were concerned that the trailer's worn-out shocks would mean a bumpy ride and, ultimately, a damaged table.

Jim came to the rescue. Rummaging around our storage room, he found a case of paper towels and a half-dozen rolls of duct tape. "This might do the trick!" he announced, "Oh, and Jay," he added, "I'm going to need a saw."

A saw? Near this spectacular table? My heart seized up for a minute, but I decided to trust him.

An hour later, the table was secure in the trailer - and packed so carefully it could withstand a collision with a Hummer. First, the table was swathed in bubble wrap. Then, Jim constructed a crate using scrap wood. Placing the table into the crate, he used rolls of paper towels to act as shock absorbers. He topped it off with a tarp in case of rain.

Father and daughter honked to say good-bye as they pulled out of the parking lot, happy with their treasure and with the innovative packing that insured they'd get the table home without a scratch.
Jim is one lucky guy to have survived a health whammy. And we're lucky, too. He came out of it with his big heart - and his creativity - intact. Thanks to him, our customer will be serving dinners on the table of her dreams for years to come.