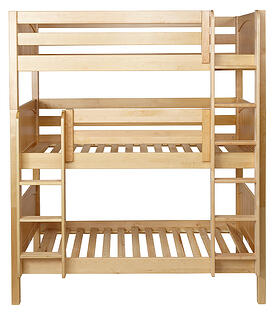 We always fought over the top bunk. In fact, I usually started the fight. I was the oldest of the three boys in my family. So my dibs meant the top bunk was somehow more desirable than the bottom. In reality, I didn't want the top bunk. Too hot up there. But conceding it to my brother gave me the imperial mantle of peacekeeper. And then, of course, he owed me one.

The bunks were in our camp on Lake Ossipee in New Hampshire. My parents wanted a place where their sons could run wild in the summers. My dad wasn't about to spend his hard-earned money on furniture for three rambunctious boys who were barely housebroken. So he made those beds.

Frucci men, by nature, are not exactly patient or exacting craftsmen. My dad picked up a couple of pine boards at the lumberyard, shoved them through a circular saw and drilled a couple of holes for bolts. It probably took all of an hour.

"File these," he said and without any more instruction he handed the boards off to me. I took a metal file to the rough edges. Then we stained the wood and assembled the beds. Voila! We boys had something infinitely valuable to fight over for year to come.

I slept well in that bunk. I laughed a lot with my brothers. We raised all kinds of Cain. I remember the cool lake breeze and the water lapping against the rocks. When my parents sold that camp years later, the new owners insisted on keeping those rough-hewn beds. Probably knew there was good kid magic in those old bunks.

Among the many things I learned from that experience was that furniture has to be functional. People needed a place to eat, sit, work and sleep. Our bunks were sturdy, safe and, best of all from my dad's point of view, cheap.

If you're looking for bunks - or any kind of kid furniture built to survive major shenanigans - skip the lumberyard. Stop by one of our three showrooms. You will find the good stuff, made well, at the best prices at Furniture Consignment Gallery.

"Dad!" Robbie, my four-year-old, was tugging hard on my coat. I bent over to listen. His blue eyes still have a lot of baby in them, and they locked onto mine. "Dad," he said, urgently and loudly over the noise of the jubilant crowd on Boston's Boylston Street. "I have to go to the bafroom."

Not now, I groaned to myself. We had a prime viewing spot right at the finish line of the Boston Marathon. My brother, JT, was running. Any minute now, he would be crossing the blue-and-yellow line. His journey to the marathon had been a long and arduous one. I really wanted to be there to cheer for him.

"Yeah, Dad, I'm starving." Cade, my thirteen-year-old, always seems to be hungry now that he's a teenager. I glanced over at my wife, Diana. Maybe we had a few minutes to find a bathroom and grab some hot dogs for our three boys. Besides, my parents were stationed a block or so down the course, also on Boylston Street. They'd alert me with a text if they saw my brother nearing the finish. Diana smiled and nodded as if to say "What can you do?"

Ten minutes later, the boys were munching happily on hot dogs we'd gotten from a vendor on Exeter Street. We were hurrying back to the finish line when suddenly we heard a massive explosion. The street shook beneath our feet. We stopped for moment, confused. Then, a second explosion "It's a bomb!" I shouted to Diana, as we grabbed the boys and started running for cover.

My brother was only a mile away from completing the marathon when the cops diverted him - and thousands of other runners - into Kenmore Square, where they frantically tried to call or text loved ones they feared had been hurt or killed. My family was one of the fortunate ones. We were shaken, but safe. My parents were sitting directly across the street from the site of the second explosion. They were unharmed, but they witnessed the carnage, which has left them deeply distressed.

I can't stop replaying that afternoon in my head. I am sure the terrorists who planned the attack would have been disappointed that we stepped away. After all, we were the target - along with all the hundreds of other families and friends celebrating a race that brings out the very best of the human spirit: courage, endurance, hope.

Our near-miss mirrored the paths of so many others.  The terrorists want us to be believe we should be punished for our way of life and for our freedoms, but the angels hovering at the finish line who were there to guide and protect so many of us, defy all of that logic. There are those who were not as lucky and we pray for their recovery. Now our job is to get back to business.

Ways to help the Recovery

Donate to the official charity of The One Fund Boston, Inc. to help the people most affected by the tragic events that occurred in Boston on April 15, 2013.

or you can support the Red Cross with blood bank replenishment.

For More info about donating blood in your area please click here. 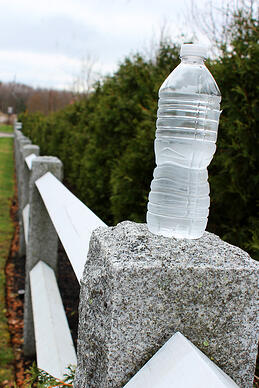 Early in the morning, picking up the paper in the driveway, I saw the water bottle perched on top of a fence post by the road. Condensation was beginning to freeze on the outside. I knew he was out there in the cold, racking up the miles, training for the Boston Marathon.

On Monday, my 37-year-old brother will fulfill one of his life's goals when he strides across the blue-and-yellow starting line in Hopkinton, MA, one of 27,000 runners. At 37, he has two other goals for the marathon. He wants to finish it- and enjoy it.

For almost a year, my fence post has served as a pit stop on his journey to Hopkinton, his water bottle a daily reminder of his determination. Not so long ago, when we three brothers would race, JT always came in last. He'd stagger in eventually, groaning in pain. He was out of shape and he consumed too much of the unhealthy stuff.

All that changed two years ago. He embraced health and fitness with a newfound discipline. I ran with him recently, but turned back home, tired and footsore, at mile three. He continued merrily down the road for another seven miles. After he completed two other marathons successfully - with times of 4:54 and 4:35 - JT's running club helped him secure a coveted slot in the world's most prestigious race.

We salute JT and all the runners who will pit their will and their endurance against the challenge of running 26.2 miles. Our family will 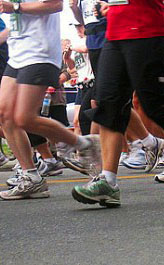 join JT today at the Runner's Expo in Boston, where he'll pick up his bib number and race instructions. Tomorrow, we'll carbo-load a pasta dinner at Mom's. On Monday, we'll be cheering when he crosses the finish line.

The marathon brings tens of thousands of runners to Boston, and we're always delighted so many stop by our stores during the weekend. (Here's the tip-off: they're wearing the blue jackets with the yellow stripes, and they're as lean as greyhounds.)

So if you are running the marathon, why not keep on going? Our Chestnut Hill store is only 6.3 miles from the course. Hanover is another 33 miles - we'll have a water stop set up for you. And Plymouth is only another 24.3 miles. Please, folks, just don't ask me to pace you, but if JT hasn't expended all of his energy maybe he will lead the charge.